I have now been in Ann Arbor 2 full days and have had rain and today hot and humid. I think CT has a rival for PMS weather. Today was the start of the Football season. Go Blues! Nearly every UM student was out maize and blue to support the team. The activities start around 9am for a 3pm game with tailgating, a tradition of barbecuing in parking lots while drinking and discussing the chances of the team. I attended a tailgate with other atmos grads across the road from the marching band practice. The marching band has over 300 people and they wear these weird hats which in my opinion look like naval hats with feather dusters stuck in them. Whatever floats your boat.

One the way to tailgating I passed the sororities and fraternities tailgating. lots of alcohol, loud music and very little clothing is all i'm saying.

A weird advertising system seems to be used here, chalk on the sidewalks. Its ecofriendly, colourful and different. Seen something similar in Oxford but not to this extent. I'll take pictures when I find a super cool one.
Posted: Hayley at 12:17 AM No comments:

My plant trip to the states was filled with turbulence from beginning to end. My flight went via Dakar to NY and we had maybe 2 hours total of the 18 hours turbulence free. My trip from NY to Detroit followed this pattern. I have arrived in Ann Arbor and tried to my admin out of the way, seems my paperwork has yet to go through and I have to wait til after Labor Day on Monday to get anything done. Tomorrow is the first football match between the Michigan Wolverines and Utah Utes. Don't ask, don't know. Today is Michigan day and everyone is meant to wear Michigan colours: Maize and Blue. This school has a lot of pride and a lot of branding, UCT could learn a thing or two about school pride from this crowd.
Posted: Hayley at 4:47 PM No comments: 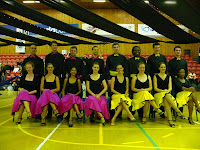 UCT returns victorious from PE after winning the ballroom and latin intervarsity. I have to say the social the night before sucked and the schedule was choatic to say the least but overall NMMU did a fairly ok job. I hesitate to say good, they could have improved on a lot and charged much less. Well done to everyone who received medals and a special well done to the UCT beginners who shook their booty nicely.
Posted: Hayley at 4:37 PM No comments: