We had family from overseas for dinner. Dinner had a distinctly South African feel, Bobotie and Malva Pudding. It went down really well and I wonder if some of the ingredients are available overseas, I'm pretty sure Mrs Ball's Peach Chutney is hard to come by overseas. A recipe for those keen to try:

Put A into a heavy pan. Heat well. Add butter and stir till melted. Fry onions till soft (add oil so the butter doesn't burn). Remove the pan from the heat and add B and mince and bread. Return to the heat and stir constantly so it does not stick and cook for 20 minutes.

Place in a greased dish. Beat the egg and milk and pour over the meat. Place lemon leaves on top. Bake for 45 minutes at 180C or 10-15 minutes in the microwave.
Posted: Hayley at 10:47 PM No comments: 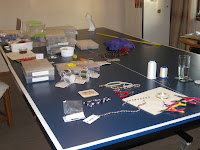 The bead factory has returned. I've missed this creative outlet while in the USA, especially after seeing the price of beads in America versus beads in South Africa. I guess the quality is much higher and hence the prices but the average piece of jewellery does not need precision Czech seed beads. The Chinese seed beads at a quarter of the p 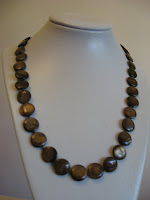 rice do just as well.

I made a gemstone knotted (pearl-knotting technique) necklace in brown with matching earrings and a plum bugle bead necklace with a bronze pendant. I am now in a quandary of what to make with my purple gemstones to match my new dress.

Tonight is a family dinner of babootie and malva pudding, yum. Both are very well known in SA but I know for a fact are unheard in most other parts of the world.
Posted: Hayley at 3:35 PM No comments:

Under the African Sky

I have finally returned home after 4 months away. Its nice to be home and weird to note that very little changes. There is comfit in stability. I have yet to unpack but have taken advantage of the glorious sunshine and warmed my frozen limbs and reflective legs (i really need a tan).

The plane trip was a rushed transfer from Delta to NorthWest to make my Cape Town connection and musical seats in the plane to accommodate families with children. The flight itself was turbulence free, but I still managed about 3 hours sleep total. After 27 hours in airports and planes I officially landed on home soil and the feeling on coming home was glorious. Sunshine and wind. Welcome to Cape Town.

I will hopefully get around to seeing everyone in the next few days when my jetlag disappears and be back in the social whirl of summer. See ya soon :)
Posted: Hayley at 1:34 AM 1 comment:

It is my last day in Michigan before I jet off home to the land of sun and sand. I wish I could extend my time here but another part of me wishes I could be home already and laughing with old friends on the beach. I guess its something that happens whenever you leave a place you have invested time in.

Will I come back? I'm not sure, I like Ann Arbor and the University of Michigan, but I'm not sure if I could do it long term. We'll see where my studies take me, if I'm ever in the States again for a conference or workshop, I'll definitely make an effort to visit everyone.

On my final day it is snowing and -15C, I think Michigan tried to show me the worst of winter before I left. There is over a foot of snow on the ground and icicles hanging from the trees. It is all beautiful yet a stark reminder that I am in a foreign climate.
Posted: Hayley at 8:48 PM No comments:

Email ThisBlogThis!Share to TwitterShare to FacebookShare to Pinterest
Labels: Michigan

I missed the girls nights in CT so I decided to host girls night last night. I warned my housemates in advance that there would be an influx of girls if they wanted to hide :). I made malva pudding and got some candy and chips, veggies and dip and we watched girly movies. First up Made of Honor which was entertaining and a perfect way to relax. The second movie for the diehards (since we started it after midnight) was Wall-E which is super cute.
Posted: Hayley at 6:50 PM No comments:

Email ThisBlogThis!Share to TwitterShare to FacebookShare to Pinterest
Labels: Social 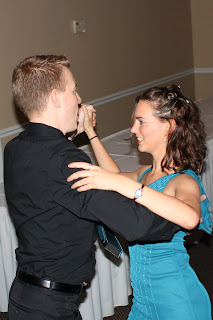 The HKN Banquet was held last night in at Creek Side Bar and Grill in their functions room. The banquet is a semester event for all HKN members and their dates. It is also a chance for the electees to be inducted into the Society. The food was decent, a buffet style. I wore a teal dress I borrowed from the Ballroom Team stash, not sure I want to give it back though, its pretty. I never realised how socially awkward most engineers are on the dancefloor.

The electees have to wear resistors for the week leading up to the banquet and if seen without them have to pay a penalty in the form of some humiliating act. This time was serenading the president of the society with "I want it that way" by BackStreet Boys. Funny to watch though none really got into it and made it a comic event. The president and president-elect opened the dancefloor with YMCA, more socially awkward :)
Posted: Hayley at 3:22 AM No comments:

Email ThisBlogThis!Share to TwitterShare to FacebookShare to Pinterest
Labels: Social

My topic of research while in Michigan is on Land Use and Land Cover Change which made today's paper which I had to present especially interesting. The paper "Evaluating the effects of historical land cover change on summertime weather and climate in New 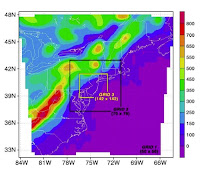 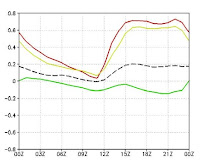 hanges to the diurnal cycle. The interesting thing to note is that all three processes have occurred in the state of New Jersey within the last century. Reconstructing the land cover from historical topographical maps and land consensus, a full land cover map was available for direct comparison with NLCD data from 1992. Aggregated to 1km and combined into 8 vegetation classes, the researchers used RAMS and LEAF2 to compare atmospheric responses to land cover change. 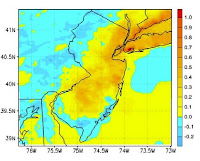 They nested the grid in 3 levels (above-purple) and 3 ensemble members per land cover scenario, they used a 2 month period in June/July 1999. From NCEP data to force atmospheric boundary conditions, they used June as a spinup and July as a month for analysis. The soil moisture was described from observation.

The model comparisons showed an increase in near surface air temperature and dew point temperature in urban and deforested areas and cooler in reforested areas, just as previous research stated. The results overall come as no surprise but they way they use the ensemble without giving the spread or error is slightly weird.
Posted: Hayley at 12:13 AM No comments:

Land of ice and snow

I awoke today to white, not little bits of it, but the entire world blanketed by snow. The roads are the only thing visible currently. Last night was a treacherous time to be on the road, the snow was falling fast and ice covered the roads. Most cars couldn't stop and fishtailed before the wheels caught. I have no wish to be in a car again for a good while. Things in Michigan are moving, albeit slowly. Exam time looms in a week.
Posted: Hayley at 7:51 PM No comments:

Email ThisBlogThis!Share to TwitterShare to FacebookShare to Pinterest
Labels: Michigan

Its all about connection

For those who dance and gap, these exercises are for you.

Get into cuddle hold (think std 8 dancish cross ballroom hold), I'm serious that's what they called it. Now do Rhythm Foxtrot and try stay together by leading with the body and girls not anticipating the next move. Stay on your toes so that the girls can feel the weight transfer. When this is working try do Slow Foxtrot steps like the feather finish and heel leads through lowering.

In Rumba, girls try match the guys moves by following the body and hips (no looking at his feet). I'm including hip twists, fans and hockey sticks in this. Apparently people in tune will be able to follow from body cues, not just arms. Try for a while and you'll notice your awareness of your partner increases and your concentration.

Now girls close their eyes and just try holding your hands flat against each other like in shoulder to shoulder. Girls should feel the guy moving the girl through his weight moving and the aim is to feel the direction and timing. You'll be amazed how much concentration it requires, especially from the guys to communicate their moves through and wait for the girls.

Lastly stand side by side holding hands. (Girls should be on the right). Girls close their eyes and let the guy lead you in walking, following his timing and direction (forward, backward, side to side). Girls don't anticipate anything.

Its all about the connection.
Posted: Hayley at 7:08 AM No comments: