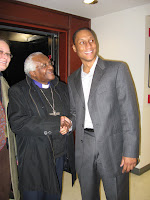 Desmond Tutu is being honoured today in Michigan. Tutu will be awarded the Wallenberg Medal and deliver the 18th Wallenberg Lecture in honour of Swedish diplomat Raoul Wallenberg (U-M graduate) who saved thousands of Jews in WWII. It turns out that Tutu is the second South African to receive the medal, Helen Suzman being the first.

The press conference in the afternoon was jammed full of reporters but I managed to talk to the organisers and was allowed to sit in on part of it and be introduced to him. Apparently someone forgot to mention that Michigan i 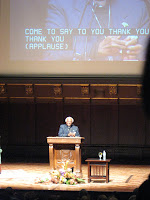 s cold in October as Tutu arrived with summer suits. The organisers had to scramble to find him a coat and scarf to keep warm.

The Wallenberg Lecture itself was packed, all 3500 seats filled and an overflow hall set up. Archbishop Tutu spoke about the award going to all the people who made the end of apartheid possible. He has an incredible sense of humour that shines through on lighter moments. He encouraged the youth to dream and keep dreaming of peace and freedom globally. He critised Darfur and how rape has become a weapon of war. He finished his address with a metaphor. That an eagle should be taken and nutured and then set free from the mountain tops to soar.
Posted: Hayley at 8:05 PM